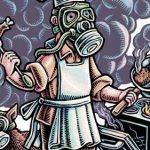 Kitchen As A Pollution Hazard

By midmorning, the smell of hot peanut oil dissipated and inside the tightly sealed laboratory known as Building 51F, a pink hamburger sizzled in a pan over a raging gas flame. Overhead, fans whirred, whisking caustic smoke up through a metallic esophagus of ductwork.

Woody Delp, 49, a longhaired engineer in glasses — the Willie Nelson of HVAC — supervised the green bean and hamburger experiments. He sat at a computer inside a kitchen simulator, rows upon rows of numeric data appearing on his screen, ticking off the constituents of the plume sucked up the flue. A seared hamburger patty, as he sees it, is just a reliable source for indoor pollution.

“I can claim Alice Waters’ influenced the recipe,” he said. “It’s all fresh and local.”

But Dr. Delp and his colleagues aren’t really interested in testing recipes. They are scientists at the Energy Department’s Lawrence Berkeley National Laboratory, and the morning’s experiment concerned another kitchen conundrum, a fight against physics: how to remove harmful contaminants caused by cooking.

Find out why installing the EZ Breathe Ventilation System is beneficial to your home.

Simply put, cooking is an act of controlled combustion — you set oil, fat, and carbohydrates on fire. As a health hazard, incinerating hamburgers and green beans may pale in comparison with lighting wood or coal fires indoors, the leading environmental cause of death and disability around the world. Yet frying, grilling or toasting foods with gas and electric appliances creates particulate matter, nitrogen dioxide, carbon monoxide and carbon dioxide, and volatile organic compounds. (Acrolein, which most cooks recognize as the smell of burnt fats or oils, was used in grenades in World War I because it causes irritation to the lungs and eyes.)

Emissions of nitrogen dioxide in homes with gas stoves exceed the Environmental Protection Agency’s definition of clean air in an estimated 55 percent to 70 percent of those homes, according to one model; a quarter of them have air quality worse than the worst recorded smog (nitrogen dioxide) event in London. Cooking represents one of the single largest contributors, generating particulate matter (formally known as PM2.5) at concentrations four times greater than major haze events in Beijing.

“Because we’re used to the smell, we don’t think of it as an issue,” said Jennifer M. Logue, 32, an air quality engineer at the Berkeley Lab. “When you live in a small building, you cook a lot and don’t use your range hood, which may not be very effective anyway, then you’re probably going to have a problem with pollutants from cooking.”

Recently Dr. Logue estimated the long-term health effects expected from hundreds of chemicals found in average homes. Her 2012 study, published in Environmental Health Perspectives, used a common epidemiological metric known as disability-adjusted life-year to show that the population-wide health impact of indoor pollutants is on a par with that of car accidents, and greater than that of traditional concerns like secondhand smoke or radon.

Federal policy and financing tends to focus on research outdoors — air quality, drinking water, wastewater, hazardous waste sites and soil contamination. “We haven’t had that regulatory driver for the indoor environment, and yet the indoor environment is probably the most important environment in terms of human health,” said Richard L. Corsi, an engineer and professor at the University of Texas at Austin.

“If you look at just the dose of toxic chemicals we take into our bodies during our lifetime that are of environmental origin, it’s dominated by the air that we breathe and the surfaces that we touch indoors,” Dr. Corsi said.

The Berkeley Lab’s research is driven, in part, by renewed efforts to tighten building envelopes and save on energy costs. Airtight buildings keep outdoors out, but they also trap contaminants. Efforts to mask odors — incense, candles, and air fresheners — exacerbate the hazard. After all, indoor combustion creates more pollutants that linger in tightly sealed spaces; and, formaldehyde, for example, is formed when ozone reacts with gases, especially scenting agents, plug-in air fresheners and cleaners.

Since people aren’t likely to stop cooking, the lab aims to come up with science-based ventilation standards. “People don’t need to radically change their lifestyles,” Dr. Logue said. “We need to change the building codes so that everyone gets a venting range hood.”

Current ventilation standards — the V in HVAC — represent a best engineering judgment. There’s never been much science involved in determining how well range hoods and other ventilation systems should work in terms of human health. Existing metrics for performance, most notably the Energy Star rating, measure energy use, not the impact of the appliance on human health.

And while it’s difficult to rid a home of the semi-volatile organic compounds that leak out of, say, a couch over a long period of time, volatile compounds from fire and water vapor can be removed with an effective kitchen fan. “A lot of homes don’t have that,” said Brett Singer, the lab’s director. “Secondly, a lot of the ones that do, people don’t use them, and thirdly, even if they have it and even if they use it, a lot of them don’t work very well.”

When they tested seven different commercially available range hood designs, Dr. Singer and Dr. Delp found that the airflow and the amount of burner exhaust and cooking contaminants whisked away — the so-called “capture efficiency” — varied from 15 percent to 98 percent. (Dr. Singer refers to recirculating hoods, only somewhat jokingly, as “forehead greasers.”)

Inside the kitchen simulator, fresh air whooshed through the room — an exchange rate of about 12 times per hour, nearly 40 times the amount circulating in an average home. But the experiments hadn’t generated much appetite. One lab assistant, Omsri Bharat, passed on the burgers because she is a vegetarian, and the other, Marcella Barrios, a science teacher, admitted to having packed a lunch.

Dr. Singer is optimistic that new scientific standards might even change habits inside actual homes. “We want people to cook,” he said. “The health of America will probably get better. We just want to make sure all those pollutants, vapors and moisture from cooking get vented outside.”